Excerpt from the Glenwood Neighborhood Plan:

THE FOUNDING OF GLENWOOD

In the late 1890s, the area that now comprises the Greater Glenwood Neighborhood was beyond Greensboro City limits, and was predominantly farmland. The earliest records available indicate that residential development of the area originally known as Glenwood began in 1906, in the “L” shaped area bounded by Lexington Avenue, Florida Street, Portland Street, Oak Street, McCormick Street, and West Lee Street. Adjacent areas had been platted in previous years, and were given other names, although only a few of these are still used today. Areas to the east of Lexington Avenue were known as Silver Run Park and Jackson Park, while the area west of Aycock Street was known as Piedmont Heights, and the area through which Lovett Street runs was known as Mt. Vernon Heights.

The Carolina Real Estate & Investment Company began construction of the first 50 homes in Glenwood in March of 1909. The construction methods used were innovative for the time, in that homebuyers could select a home from a catalog of standard floor plans, and all lumber arrived at the construction site pre-cut and ready to assemble. One interesting publicity technique used by Carolina Real Estate & Investment Company involved offering the State of North Carolina 25 acres of free land in Glenwood, in order to entice relocation of the state capital from Raleigh to Greensboro – the state respectfully declined this offer.

Even before construction began in Glenwood however, the American Suburban Corporation had begun building homes in the Piedmont Heights area as early as 1905. Around 1922, a developer named S. J. Stern purchased the remainder of Piedmont Heights, platted an additional 500 lots, and resumed construction of modestly priced, yet full-featured homes. Stern sold the homes through an innovative payment plan with a $300 down payment and monthly installments of $20, helping to meet Greensboro’s strong demand for affordable housing at the time.

The majority of the Greater Glenwood neighborhood, to just south of Linwood Street, was annexed by the City of Greensboro in 1923. The remainder of the neighborhood was annexed in several sections from 1954 to 1957.

Glenwood’s first school, a one-story four-room wooden structure, was built around 1912 at the corner of Freeman Mill Road and Fairbanks Street. This school was later expanded by adding a second story with four more classrooms and by 1919, had a total enrollment of 259 students, with an average daily attendance of 143. During the 1920s, three new schools were built in the Glenwood neighborhood. Glenwood Graded School was built on Fairbanks Street to replace the 1912 wooden school next door. Also built in the early 1920s was the Charles D. McIver School, which still stands on West Lee Street. This was one of the first large two-story brick schools built in Greensboro and is the only Glenwood structure listed on the National Register of Historic Places. In 1928, Glendale School located at the corner of West Florida Street and Van Wert Street opened. At the start of the 1929 school year, this building was renamed Clara J. Peck School in honor of Clara Jane Thornton Peck, Greensboro’s first public health nurse.

In 1907, Telfair Sanitarium (later becoming Glenwood Park Sanitarium in 1918) was moved from Asheville, North Carolina to 1305 Glenwood Avenue, overlooking Glenwood Park (now Morris Farlow Park). This park was once privately owned, but was conveyed to the City to pay for the paving of Lexington Avenue. The sanitarium structure was razed around 1960 and a parking lot now occupies this site.

In 1934, a trackless trolley service was established in Greensboro, replacing the earlier streetcar system. The new service included a route that ran between downtown and Grove Street in Glenwood. Glenwood enjoyed its era of greatest prosperity with the arrival of the trackless trolley system. This service continued through 1956, when Duke Power replaced the trackless trolleys replaced with diesel powered buses – the Glenwood route was the last to operate. It is interesting to note that Glenwood’s vitality began to wane only after the trolley service ended.

In response to the erosion of Glenwood’s vitality, which began the 1960s, the City of Greensboro made efforts to reverse this decline. Starting in 1975, redevelopment plans were prepared for several areas in Glenwood, north of West Florida Street and east of South Aycock Street. These areas were designated as “Target Neighborhoods” for housing rehabilitation, crime control, infrastructure improvement, and home-ownership promotion projects through the Community Development Block Grant program. All projects initiated for that target area were completed by 1982, and its Target Neighborhood status was closed.

The Glenwood Community Watch program, the first of its kind in Greensboro, was created in 1977 through the efforts of Glenwood resident and business owner Janette Miller. In 1981, a gathering of Glenwood residents establish a neighborhood association to work together in improving their community. The Glenwood neighborhood received the Governor’s Award for Excellence in Crime Prevention, recognizing the work of the Community Watch Program. Despite these efforts on the part of both the neighborhood and the City, Glenwood’s deterioration resumed in the 1990s, and along with requests from GGNA, prompted the City to further action, including the Glenwood Neighborhood Plan. 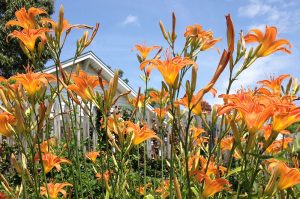 GGNA has moved to a
quarterly meeting schedule due to the ongoing
coronavirus pandemic.
Additional meetings may be scheduled if the public health situation improves or urgent
neighborhood issues come up.

An announcement will be made prior to each meeting to let community members know if the meeting will be held
in-person or online.

Additional meetings, if scheduled, will be announced here, through email, and on GGNA social media channels.